KiVa is an evidence-based bullying prevention programme that has been developed by the University of Turku, Finland. Ellesmere College – Te Kāreti o Waihora was the first co-educational secondary school in New Zealand to implement the KiVa programme. The effectiveness of KiVa has been proven through randomized control trials, together with a range of different studies. KiVa is being used around the world in over 18 different countries.

KiVa has been developed by experts who have been studying the phenomenon of bullying and its mechanisms for decades. The team is led by PhD, Professor Christina Salmivalli and PhD, Special Researcher Elisa Poskiparta, both from the University of Turku, Finland.

The Finnish data showed that after the first year of implementation, the programme reduced all forms of bullying significantly. 98% of the bullied students felt that their situation improved after the intervention. In addition, positive effects on school liking, academic motivation and achievement have been reported. KiVa also reduces anxiety and depression and has a positive impact on students’ perception of their classroom culture.

Numerous studies show that KiVa is effective in other countries as well. The Netherlands, Estonia, Italy, Wales and New Zealand are among the regions where research has been conducted and adds to the positive findings about the KiVa programme.

The essential elements of KiVa – Prevention, Intervention, and Monitoring

Prevention – to keep bullying from happening

The preventive actions focus on all students learning how to prevent bullying. Student lessons and online games are  examples of these kind of actions and form the foundation of KiVa.

The interventions in KiVa are targeted specifically at students who have been involved in bullying. The goal is to provide schools and students with solution-focused tools used to put an end to bullying.

KiVa offers tools to monitor the situation in the schools through an annual online survey for students. This feedback provides schools with information on how to improve their bullying prevention work.

KiVa is visible at Ellesmere College – Te Kāreti o Waihora in a number of ways. Junior students in Years 7 & 9 take part in regular KiVa lessons with their Hapori teacher. These lessons include the importance of respect in human relationships and about understanding what bullying behaviour is, along with developing proactive strategies.

All staff have received a full day of professional development about the programme and how to implement it. We have a KiVa team made up of teachers from across the school who follow a set programme when addressing issues related to bullying which have been identified and reported. Teacher who are part of the KiVa team participated in a second day of training about how to specifically manage KiVa referrals.

If you suspect your child is being bullied or they are demonstrating bully-like behaviour, please contact your child’s Hapori teacher via email to let them know so it can be dealt with as efficiently and quickly as possible. 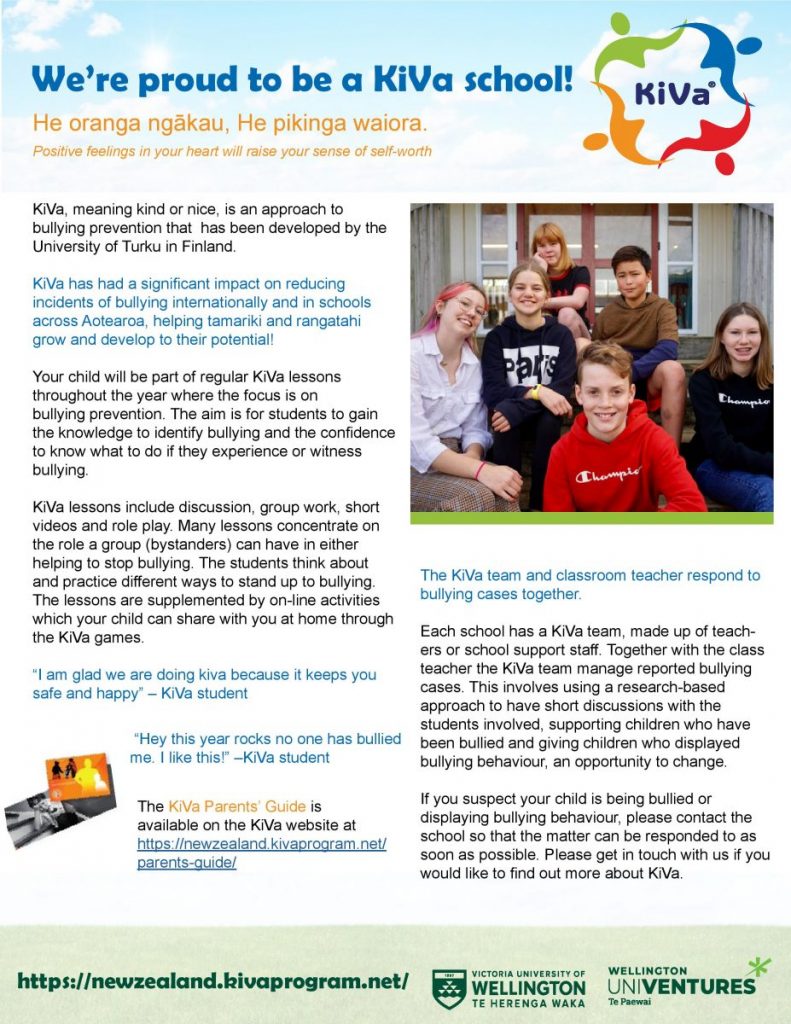